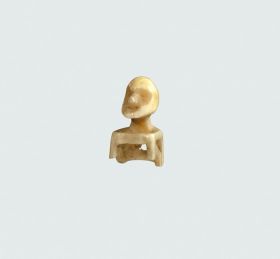 Humphrey No. 96: ‘a small piece of rude Sculpture, made of the bone of some Marine animal in imitation of a couching human figure, and used as a button to their hats by the Natives of Unalaschka in Beering Straits.’

A male figure in a seated posture has been carved out of a small piece of bone, with the arms folded over the knees, the eye-sockets large and deep, and the mouth slightly open. The flattened back has a round hole.

Humphrey’s assertion that the piece was used as a decoration for Aleut hats on Unalaska is confirmed by Webber’s representation of an Aleut. This illustration depicts such a figure fastened to the rear edge of his visor (evidence for conical hats of the Aleut in a stricter sense exists only for later times). The hole in the back of the figure serves the fastening of the figure with a string (Joppien/Smith 1985-88, lll/2: 518f., 3.286-87A; cf. Cook and King 1784, 11: 509). The visor depicted by Webber is very similar to an example from the third voyage in the British Museum (King 1981: 46-49, PI. 11-12). Also very similar are two analogous figures from the Göttingen collection of Baron von Asch (Am 788, Am 789), which can similarly be attributed to the Aleut. The whereabouts of a like piece from the third voyage, sketched by Sarah Stone in the Leverian Museum (Force and Force 1968: 156), is unknown.

Cook, James and King, James, A Voyage to the Pacific Ocean, Strahan, London, 1784.

Back to Alaska
Back to Jewellery & adornment