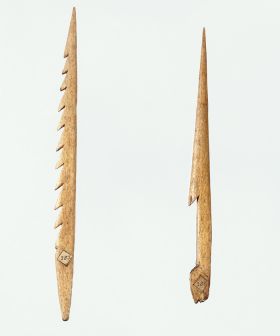 Humphrey No. 284: ‘another [Head or point of a fish-spear], with only one barb, also made of bone, from Terra del fuego.’

A long, slender point, blunt at the (somewhat tapered) rear end, has been made from a piece of whalebone by grinding with pieces of sandstone or pumice stone. A piece in the shape of a parallelogram has been cut out of one side near the end to make a barb, while the lower end is nearly rectangular.

Beaglehole, John Cawte, The Journals of Captain James Cook on his Voyages of Discovery. The Voyage of the Resolution and Discovery 1772–1775, Hakluyt Society, Extra Series, 35, Cambridge University Press, Cambridge, 1969 [1961, II].

Back to Tierra del Fuego
Back to Fishing & hunting