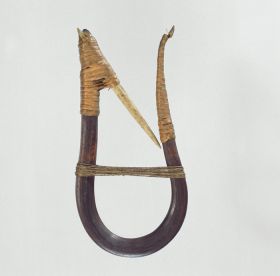 Humphrey No. 246: ‘another [fish-hook] made of a bent piece of a strong Sinew of a Whale or other large fish and barbed with bone, neatly tied to the hook with Withs; when they have done using it, they tye two Sides to preserve it’s bent Form. King George’s Sound.’

U-shaped wooden hook with a cross-section almost approximating that of an isosceles triangle. There is an inward-pointing bone spike at the thicker end, affixed by lashing with spruce root splints. The thinner (broken-off) end is similarly lashed. A Z-twisted sinew fibre over a metre long is wrapped around the middle of the hook. This was intended to keep the hook in form when not in use, and otherwise for holding the bait. Missing however is the cord which is usually affixed to the hook opposite the tip of the spike, for fastening to the device used when catching the halibut. The piece was described and illustrated by Haberland (1979: 210, J-12) and was also mentioned by Kaeppler (1978a: 276).

The description in the Humphrey catalogue, which states that the hook consists of the bent sinew of a whale or other large fish, is incorrect.

Cook and his companions described the fishing devices of the Nootka only very briefly, and otherwise as ‘mediocre’ or ‘unartistic’ in fabrication. Samwell admitted that the travellers had never seen these devices in use, so that they could not judge the skill of the Nootka regarding their use (Beaglehole 1967, Illa: 320 f.; Illb: 1410; cf Ledyard 1963: 76). Philip Drucker’s Nootka informants described the application of the wooden hooks for the halibut catch (although smaller examples were evidently also used to catch other fish). The old method probably used in Cook’s time was to fix the floating hook to a stick using a sinew cord, the lower end of which was attached to a line with a stone ‘sinker’, the line being lowered into the water from the boat and towed along behind. In 1868, the Indian agent Sproat described how hundreds of boats, each with two to three men, would set off at midnight to arrive the next morning at the fishing grounds (Drucker 1951: 22f.; Sproat 1987: 151).

Gunther, Erna, Indian Life on the Northwest Coast of North America as seen by the Early Explorers and Fur Traders During the Last Decade of the Eighteenth Century, Chicago and London, 1972.