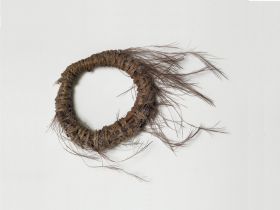 Humphrey No. 108: ‘a strange kind of Ornament or Ruffle made of Feathers and worn over the Penis at New Zealand.’

Feather wreath made of bird feathers; the feathers are badly damaged.

Although Kaeppler (1978a: 175) also referred to this object as being from New Zealand, and described it as a ‘feather penis covering’, its origin and application are in fact uncertain. No comparable items could be found for the present catalogue.

Cook described the male clothing in detail: ‘but they wear a belt, to which a string is fastened, for a very singular use ... these people ... bring the prepuce over the glans, and to prevent it from being drawn back by the contraction of the part, they tie the string which hangs from their girdle, round the end of it. The glans indeed seemed to be the only part of their body which they were solicitous to conceal’ (Hawkesworth 1773, III: 454). Mead (1969) also made no reference to these items in his overview of the clothing of the Maori. It could perhaps also have been a ring through which the hair was inserted (cf. Hamilton 1896: 301). Markus Schindlbeck

Hamilton, Augustus, The Art Workmanship of the Maori Race in New Zealand, Wellington, 1896.