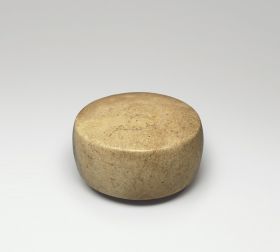 Humphrey No. 218: ‘A Stone of the same kind as the preceding article [of a yellow calcereous stone], formed into a round shape with flat sides, & and very neatly smoothed; ‘Tis used in a Game at Sandwich Isles.’

The object is made of stone and polished. Its form is that of a round disc which is flattened out towards the rim so that the upper and lower surfaces are slightly convex.

The gamestone was alternatively called ‘ulu, maika, or ‘ulu maika (Buck 1957: 372, Emerson in Malo 1951: 221). ‘Now the maika was a stone which was fashioned after the shape of a wheel, thick at the centre and narrow at the circumference - a biconvex disc’ (Malo 1951: 220). Emerson (in Malo 1951: 221) also mentioned ‘one-sided’ gamestones, however. This was interpreted by Buck (1957: 373) as gamestones with one convex and one flat surface. According to Emerson (in Malo 1951: 221), the half-grown, still round breadfruit (‘ulu) was the predecessor of the gamestone (maika). He stated that this was the origin not only of the name of the object, but also the game itself, ‘ulu maika. However, ‘ulu not only signifies breadfruit, but can also depict a round or spherical object (Krüger 1995: 152).The material used for manufacturing the maika was lava-stone or ‘a white alluvial rock, (found principally in the island of Oahu)’ (Ellis 1853: 198). According to Krüger (1995: 152), these were lava and coral stones. In addition, he listed wood as a material for making the maika, but claimed that this was less often used. The valuable gamestones were carefully stored. After use, they were oiled and wrapped up in ‘native cloth’, i.e. barkcloth (Ellis 1853: 199).

Ellis (1853: 198) described two different versions of the game for which the ‘ulu maika were used: ‘Two sticks are stuck in the ground only a few inches apart, at a distance of thirty or forty yards, and between these, but without striking either, the parties at play strive to throw their stone; at other times, the only contention is, who can bowl it farthest along the tahua, or floor.’ Krüger (1995: 152, 154) noted that the game was reserved for men, but was nevertheless played by both men of the aristocracy as well as of the populace. Inken Köhler

Back to Hawaii
Back to Music & play