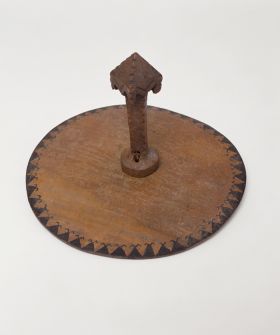 Humphrey No. 221: ‘A Meat-Safe, an ingenious contrivance used by the Natives of the Friendly Isles to preserve their Meat from Rats. ‘Tis made of a round flat piece of white wood, thicker in the middle, which is suspended from the Ceiling of their house by a plaited Cord which goes thro’ a hole in the middle of the board and is fastened to a wooden hook which is underneath, their houses being built of Bamboo in such manner that the Rats can easily climb from place to place, attracted by the Scent of the Meat they jump on the board which hangs over it, which tilting up immediately throws them to the ground, and thus disappoints them of their prey.’

The food hook consists of two wooden parts, a disc and a hook which was originally attached to it by a string. A hole is located in the middle of the disc through which the string was pulled. The string is made of plaited coconut fibre. Along the rim of one side, the smooth disc is decorated with a pattern consisting of one row of black triangles, each with a zigzag line on top. The haft of the hook is four-cornered and notched on the edges. This is about 2 cm in diameter (thinner at the top and thicker at the bottom). It has a flat and rounded top c. 4.4 cm in diameter, part of it being damaged on the side. The bottom part of the hook is about 4 cm in diameter. It is quadrangular in cross-section and pointed. It features four square barbs pointing upward, and is designed to hold whatever is hung on the hook. Three of the barbs are slightly damaged; one is broken off completely.

An almost identical food hook is located in Göttingen (Oz 136a, b). In contrast to the piece in Hanover, the disc and the hook are attached to each other with a leather string. On the upper part of the disc is written: ‘Ratten-falle von den Freundschafts-Inseln’ (‘Rat-trap from the Friendly Islands’). To this day, this piece has been listed as part of the Cook Collection.

Two microscopic wood sample determinations from 17.1.1997 and 20.3.1997, carried out by the Institut für Forstbenutzung (Institute for Forest Utilisation), have shown that the Göttingen piece is made of sycamore (Acer pseudoplatanus L.) and the Hanoverian piece of a tropical wood. The Göttingen piece is therefore a copy (cf. ‘Acquisition History of the Göttingen Collection’). Inken Köhler, Ulrike Rehr, Gundolf Krüger

Back to Tonga
Back to Household