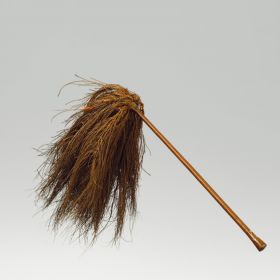 Humphrey No. 190: ‘A fly-flap or whisk, made of Cocoa-nut fibres, affixed to a wooden handle, from the Friendly Islands.’

The flywhisk consists of a handle of reddish-brown wood, and a tassel of blackish-brown coconut fibres. The handle is polished and bulged at both ends.

Anderson described the flywhisks as follows: ‘They also inlay the handles of fly flaps with ivory after being neatly carv’d, and make small figures of men, birds and other things from bone, which must be very difficult as their carving instrument is only a Sharks tooth.’ (in: Beaglehole 1967, lllb: 941). Although often described as flywhisks in the literature, these objects may only have been occasionally used for this purpose. Kaeppler (1978a: 223) wrote: ‘Apparently they were carried by chiefs (rather than by ceremonial attendants, as in Samoa) as a visual symbol of status.’ And: ‘Moreover, the Chief or some one of high rank, haranguing his people, would brandish one of these fue kafa in his hand.’ (Kaeppler 1971: 214f.).

Many flywhisks of this type feature handles with various motifs and/or inlays made of whale tooth (Kaeppler 1978a: 223f.; cf. main text). Kaeppler (1994: 518) noted that the handles were also sometimes purloined from other objects (lance points or club hilts), which possessed a power, mana, from their previous function. Inken Köhler, Ulrike Rehr, Gundolf Krüger