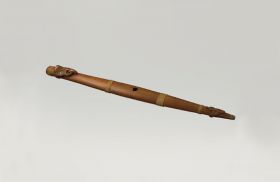 Humphrey No. 228: ‘a curious Trumpet or War-Horn used by the New Zealand Warriors, formed of a piece of wood, about 2 feet 6 Inches long, split in two, the pieces afterwards hollowed, which being joined again and tied strongly together with five Cords placed at various distances, the Joint is hardly to be perceived; It is bellied in the middle where is a round hole, and tapers from thence to the ends, the end that is blown into is about an inch over, the other is not half the breadth the hole there is very small; two sides of the Trumpet are flatted and the mouth part as well as the opposite end is carved, the former with a similar face to No. 199 and the eyes are made in like manner with pieces of the Iris Ear Shell. They blow it in the same manner as horn is, and modulate the sound by the Fingers placed over the large hole in the middle.’

Flute made of wood with an elliptical cross-section, made of two halves mounted together. There is a carving at the lower closed end; at the upper open end is a human head with mother-of-pearl eyes and an extended tongue. The ends and the middle are wrapped around with a twisted cord. There is a large opening in the middle.

The flute was played as a lengthwise flute, blowing into, or against the larger end opening. Variations in pitch could be produced by movement of the fingers over the sound hole in the middle. The player could also sing or speak into the instrument. The playing of the flutes is also shown in representations of ancestors. The instrument represents a peculiar development among the instruments of Oceania. The putorino have been more frequently described and depicted than the koauau (Urban 1971).

This type of flute is the one most commonly represented in the collections from Cook’s voyages (cf. Kaeppler 1978a: 183f.). Forster described it as they found it among the Maori which they met in Queen Charlotte Sound in June 1773: ‘a third instrument, which our people called a flute, consisted of a hollow tube, which was widest in the middle, and in this area, as at both ends, there was an opening’ (Forster 1778/80, I: 172). Markus Schindlbeck

Back to New Zealand
Back to Music & play