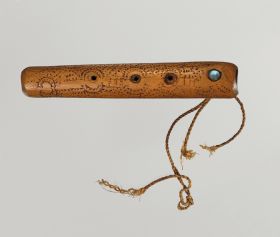 Humphrey No. 229: ‘a sort of whistle made of Wood, the two ends open, with three small holes for the fingers, tis curiously engraven in spirals and other figures formed with dotted Lines, which are supposed to be done with the point of some instrument heated in the fire, and is used by the New Zealand Warriors.’

Flute made of light brown wood, embellished with spiral patterns in dots and lines, with a mother-of-pearl plate and three holes, at one end with the remains of a twisted cord. Notch and branded band embellishments.

The flute koauau was used to accompany singing (waiata), especially romantic singing. They were played either individually, several together, or together with other wind instruments. The koauau is a lengthwise flute, held in both hands and played with the mouth. When played, the flute was held slightly downwards and to the right. The flow of air was directed to the left edge of the blowhole, whereby it was possible to sing simultaneously. The pitch could be altered by blowing in different ways. These flutes were made of wood or bone (Urban 1971).

Comparable flutes with patterns were depicted by Söderström (1939: PI.19, No. 2), in addition to one in the collection in Cambridge (Shawcross 1970: 338f.), which however features carved rather than branded embellishments. Markus Schindlbeck

Back to New Zealand
Back to Music & play