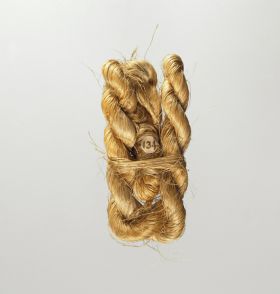 Humphrey No. 134: ‘A beautiful and strong silky Flax, extremely white, from New Zealand. The introduction of the plant producing this kind into England was greatly wished for; & some Seeds brought over by the Ships sent out on Discoveries were set in a Garden near London and shot up a little, but they soon died.’

Flax in a bundle, twisted together and wound up.

The flax plant (Phormium tenax) made a particular impression on the Europeans: ‘There is, however, a plant that serves the inhabitants instead of hemp and flax, which excels all that are put to the same purposes in other countries ... Of the leaves of these plants, with very little preparation, they make all their common apparel’ (Cook in Hawkesworth 1773, III: 443). Cook went on to mention their economic potential: ‘A plant, which with such advantage might be applied to so many useful and important purposes, would certainly be a great acquisition to England, where it would probably thrive with very little trouble, as it seems to be hardy, and to affect no particular soil’ (Cook in Hawkesworth 1773, III: 443f.).

For the Maori, flax soon became an important exchange item for iron. The great demand for flax on the part of the Europeans resulted in a resettlement of the Maori in lower lying areas, where more flax grew. The first flax was transported to Sydney in 1815. Most of the flax was used for making rope (cf. Goulding 1966).

Flax bundles are to be found in other collections, such as those in Herrnhut and Wörlitz (Augustin 1993: 122), and in Stockholm (Rydén 1965: 90f.). Markus Schindlbeck