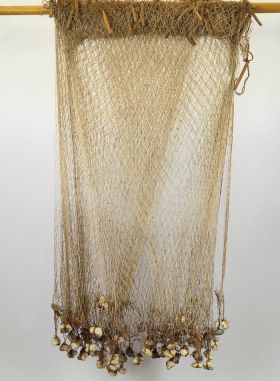 One of two fishing nets made from whitish parau (Hibiscus tiliaceus) that feature numerous weights made of white coral tied with strands of plaited coconut fibre along the lower long sides, and floats of small parau sticks along the upper long sides. They are in an extremely fragile condition and therefore have neither been taken out of safekeeping in the storeroom nor described any further below.

Handy (1927, 1971: 110-15) reported in great detail on the technique of net making with the help of netting needles, au ta upea. In addition to smaller hand and bag nets used for fishing in the lagoons and in rivers, there were large casting nets and drop nets for fishing on the reef. The two Göttingen examples were no doubt large nets (cf. Handy 1932: 84-89 and Bunzendahl 1935: 180f.). In addition to those of Hibiscus, the fibres of the roa or romaha stem (Pipturus argenteus) in particular appear to have been used as a material for net making (cf. Parkinson 1773: 44 and Henry 1928: 52). Bunzendahl (1935: 180) referred to other materials as well. The inhabitants of entire districts participated in the making of the large nets, upea ara, which were owned exclusively by the chiefs. The inhabitants were rewarded for their efforts with a festive pork meal (Ellis 1830, II: 289f.).