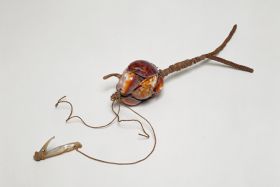 Humphrey No. 281: ‘a bait or Decoy used in fishing made of the backs of Cowry Shells in imitation of some animal, the head is formed of a Cowry Shell and it has a double Tail made in a square form of plaited twine curiously done, and a Mother o’pearl hook is affixed to it from the Society Isles.’

The fishing device consists of a lure and a compound fish-hook linked together over a length of 30 cm with a twisted cord made of pale plant fibres. The fishing line made of the same material is wound round with a thicker twisted cord, forming a loop at the upper end of the lure.

The lure has the shape of a fish and is divided into head (8.5 cm x 6.5 cm) and tail (length c. 24 cm). The head is formed of several pieces of cowry shell of varying size which are tied together into an egg-shaped form. Several twigs tightly wound round with a cord made of plant fibres are threaded through the head, thereby stabilising the whole lure. Over a length of approximately 10 cm, these firmly linked twigs form part of the tail with two rectangular plaited strands of coconut fibre strings of different lengths forming the final ‘tail fin’ at the end.

The fish-hook consists of two pieces of mother-of-pearl and corresponds to the aviti type Oz 380, but without the line of the latter running along the inside of the shank.

As in other parts of Polynesia, such lures were used to catch octopus, fe’e (Octopus). Attention was already drawn to the fish shape of these special lures by Parkinson (1773: 19, 75; Pl. 13, Nos. 15 and 25). Regarding the fishing method, Moschner (1955: 191) noted: ‘One sailed with the boat past the coral reef caves, where the octopus waited for their prey, let the lures hang overboard and tugged at the line. The octopus sucked firmly on to the supposed prey, and were then pulled up into the boat’.

Apart from the two specimens which originally belonged to the Göttingen Collection, one of which is today in the Landesmuseum (State Museum) in Hanover, there are, according to Kaeppler (1978a: 156), two comparable objects in the collections in Cambridge and Dublin. Gundolf Krüger