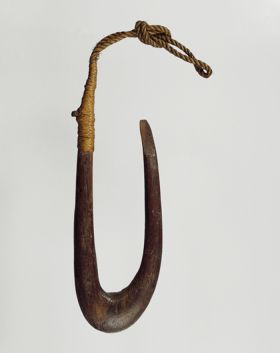 Humphrey No. 234: ‘a singular Fish-hook made of Wood, from the Society Isles.’

The U-shaped hook is made of a finely polished piece of hardwood. It is oval in cross-section, and becomes considerably thicker in the region of its curve. The point is flattened towards the side. There is a support at the upper end of the shank where a lashing of plaited coconut fibres is secured. Both ends of a twisted cord made of a different plant material are held by lashing, thus forming a loop with a knot in it.

Large wooden fish-hooks such this one were made in the Society Islands as well as in other parts of Oceania for catching sharks, ma’o. They were mostly made of a twisted root of toa or ‘aito wood (Casuarina equisetifolia) (Moschner 1955: 188). The procedure was as follows: ‘The root was twisted into the shape they wished the future hook to assume, and allowed to grow till it had reached a size large enough to allow of the outside or soft parts being removed, and a sufficiency remaining to make the hook’ (Ellis 1830, II: 294).

Bunzendahl (1935: 177f.) supplied exact information on the use of other materials (e.g. bone) and the introduction of European materials (e.g. iron) for the manufacture of large fish-hooks used in ‘off-shore fishing’.

Apart from Göttingen, large shark hooks made of the same material and of a similar form which can undoubtedly be traced back to Cook’s voyages, and which can be shown to be from the Society Islands, have been documented by Kaeppler (1978a: 157) only for the collections in Vienna and Wellington, New Zealand. Gundolf Krüger