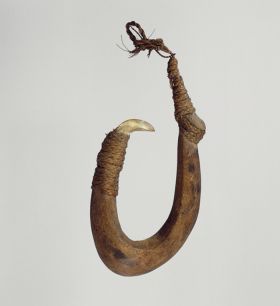 Humphrey No. 255: ‘a large fish-hook made of Wood pointed with Mother o’pearl from the Society Isles.’

The U-shaped fish-hook made of brown hardwood has the same form as Oz 206 and Oz 383, but differs in that it has a point made of shell material. As in Oz 383, a support at the upper end secures a binding made of plaited coconut fibres. The point made of shell material was apparently attached as an addition because the wood of the hook was not bent enough naturally, or could not otherwise be bent far enough. Moschner (1955: 188) pointed out that hooks were assembled in the same way in other regions as well, e.g., in Tongareva. In particular, the lashing of the hook for securing the shell point corresponds in every way to that of the wooden hook in the Vienna Collection (No. 44), so much so that there can be no doubt that it originated in the Society Islands.

Bunzendahl (1935: 176) also mentioned similar compound fish-hooks made of wood with mother-of-pearl, tortoiseshell, or bone points found in the Society Islands. They were mainly used to catch sharks, ma’o, and dolphins, mahimahi or mahimahi tari’a.