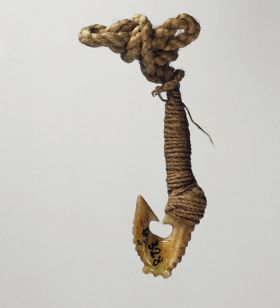 Humphrey No. 251: ‘a carved fish-hook made of bone, different from the 2 preceding, from ditto [New Zealand].’

One of two simple bone fish-hooks, with serrated outer edge and twisted cord.

The Maori fished using fish-hooks, nets, and fish traps. Bone was widely distributed as a material for making simple hooks, or for the points for composite hooks. Bones of the moa bird (Dinornis spp. and others) were often used in the South Island, although whalebone, human bones or the bone of a dog’s lower jaw were also used. The fishing line was made from twisted flax plaited into two strands. Fish-hooks were generally known as matau.

Forster mentioned the purchase of fish-hooks in Queen Charlotte Sound on 1 June 1772: ‘Otherwise we traded in many fishhooks; these were very unshapely, made of wood and with a piece of serrated bone affixed, which according to them [the Maori] was human bone’ (Forster 1778/80 I: 165). Banks emphasised fishing with nets more than with hooks: ‘Their hooks are but ill made, generaly of bone or shell fastned to a piece of wood; indeed they seem to have little occasion for them for with their netts they take fish much easier than they could do with them’ (Beaglehole 1963: 26).

Unserrated, simple bone fish-hooks are most common in the archaeological finds in the north, dating from up to the mid-sixteenth century. They were very often made of moa bone, or otherwise of other bone or mussel shells. They were less widespread in the South Island, especially in the far south (Davidson 1984: 68). The simple fish-hooks are characterised by ornamental serrations and barbs.

Hooks with serrations which are without barbs are scattered over a wide region, as well as hooks with doubled inner barbs or a barbed shank. By contrast, composite fish-hooks were widespread in the eighteenth century. Hooks with a wooden shank and a bone point are numerous in archaeological finds. The origin of composite hooks can be traced back as far as the twelfth century (Davidson 1984: 68), although they may already have been brought to New Zealand by the earliest Polynesian settlers. Markus Schindlbeck

Back to New Zealand
Back to Fishing & hunting