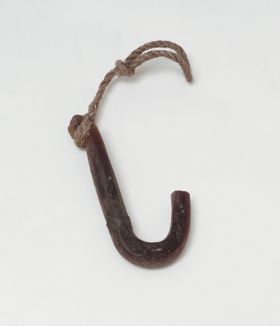 Humphrey Nos. 264 to 270: ‘Seven fish-hooks of various Shapes and sizes, made of Mother o’pearl, from ditto [Society Isles].’

Humphrey No. 271: ‘another [fish-hook] with a wooden float to it from ditto [Society Isles].’

Of the group of the Humphrey Nos. 264-270, only six and not seven specimens are still held in the Göttingen Collection. Furthermore, fish-hook Oz 390 has been lost, so that only six fish-hooks of the same type are grouped together here.

The fish-hooks are simple examples made from a piece of mother-of-pearl with a more or less rounded-off rectangular cross-section. According to Kaeppler (1978b: 119), the mother-of-pearl material comes from the shell of Meleagrina margaritifera. In each case, one side of the fish-hook is a glossy white, while the other side shimmers more darkly, attaining a dark-brown shade. All the specimens have a support at the upper end of the shank where strings made of various plant fibres are attached. In Oz 382 (=Humphrey No. 271), a string lashing leads to a small piece of pale, light wood (length 4.5 cm; Ø 0.7 cm). The piece of purau wood (Hibiscus tiliaceus) served as a float (cf. Handy 1932:82).

Fish-hook Oz 387 (Humphrey No. 270) differs slightly from the others in form. Overall, it is broader in cross-section, and also widens towards the upper end of the shank; the upper edge of the shank is not cut off straight but is bevelled, with a notch on the inner side leading outwards to the support which in this piece is particularly exposed. The notch and the support are wound round twice with a twisted string made of plant fibres, and tied to the notched corner of the shank. This fish-hook corresponds to the type depicted in Nordhoff (1930: 160) and was presumably used to catch the albacore, aahi (red tuna), specifically on Moorea. Fishing for albacore was carried out from boats with a ‘crane-like superstructure’, tira, instead of the bamboo rod customary in bonito fishing (cf. Nordhoff 1930: 139, 141ff.). According to Nordhoff, it is likely that the other fish-hooks were used to catch dolphins, mahimahi and mahimahi tari’a. Mother-of-pearl fish-hooks corresponding to the Göttingen example are depicted in Parkinson (1773: 75 PI. 13, Nos. 18, 22, 23). J R Forster (1783: 401) called them ‘mattan.’ Every fisherman knew how to make them. According to Banks (1896: 156), the time spent on this was allegedly less than a quarter of an hour.

Kaeppler (1978b: 119) described two matau in the collections in Rome and Florence which resemble the Göttingen specimens, with the exception of Oz 387. Gundolf Krüger