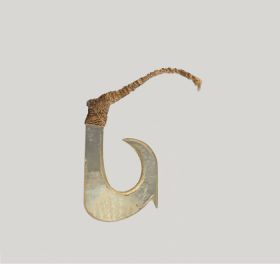 One of two fish-hooks that are made of mother-of-pearl. Oz 225 has a straight shank, that of Oz 226 is curved. A barb is located on the outer side of each fish-hook, directly below the point. The fishing line of Oz 225 is missing except for a small piece. A short brown fishing line is attached to Oz 226.

A possible classification of the makau is to distinguish between those made of one piece and those made of two. ‘Fish-hooks may be divided into simple hooks, made from one piece of material, and composite hooks, made of two pieces joined by a lashing’ (Buck 1957: 324). Emory, Bonk & Sinoto (1959: 7-11), however, introduced a new terminology. They classified the fish-hooks as ‘one-piece fish-hooks,’ ‘two-piece fish-hooks’ and ‘composite fish-hooks.’ Composite fish-hooks are those that are made of many different pieces, and which are more elaborate. The above authors argued that the two-piece fish-hooks, commonly called composite hooks, are in fact rather simple makau made of two parts. The fish-hooks which can be classified as composite are the bonito lure hooks and the octopus lure hooks, also called squid hooks (for the special materials and use of the various fish-hooks, see Buck 1957: 325-28).

Catching fish with hook and fishing line was just one of many methods that were practiced in Hawaii. Bare hands, spears, slip nooses, nets, and traps were also used (Mitchell 1982: 148f.). The fish supply remained constant, because the catching of a certain kind of fish was always restricted to a certain time of the year. Outside of this time it was declared kapu (prohibited). ‘The fish eaten during the summer months ... were different as to kind from those eaten during the winter’ (Malo 1951: 209). Fishing was the domain of specialists in Hawaii. They were called po’e lawai’a (fishermen), and were generally descended from families of fishermen. Certain religious ceremonies were associated with fishing. For these, special shrines were used (Malo 1951: 208; Mitchell 1982: 148). ‘The altar, a platform of stone ... on which the offerings were placed, was called the ko’a’ (Mitchell 1982: 151). Inken Köhler

Back to Hawaii
Back to Fishing & hunting