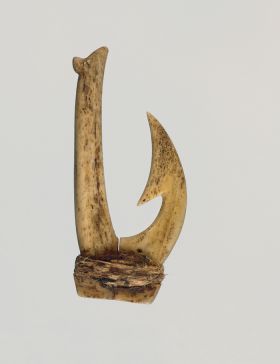 Humphrey No. 253 or 254: ‘a fish-hook, made of two pieces of bone ingeniously fitted and tied together, from ditto [Sandwich Isles]’ or ‘another less from ditto.’

One of two fish-hooks consisting of two pieces of bone which are bound together with a string made from parts of plant materials. The barb is located on the inner side of each hook. In the case of Oz 229, a brown fishing line is attached to the top of the shank. The fishing line of Oz 228 is missing, with the small projection on top of the shank for holding the line still being visible.

According to Buck (1957: 330), there are three different kinds of two-piece fish-hooks. He does, however, include the bonito hook listed by Emory, Bonk & Sinoto (1959: 27) under the category of composite hooks. ‘The first type consists of two pieces of bone combined in small, medium, and large hooks. The second type consists of the well-known bonito hook, with a pearl-shell shank and a bone point. The third type includes the large shark hooks made of wood and a bone point’ (Buck 1957: 330). The latter is also mentioned by Samwell (in Beaglehole 1967, IIIb: 1184): ‘They catch fish with Nets and Hooks of different sizes made of Mother of pearl, bone & wood pointed with bone, the latter are of a great size with which they catch Sharks and other large fish.’ The two-piece bone hooks (such as Oz 228 and Oz 229) are made in small, medium and large sizes, all of which are similar in fabrication. Their appearance is described by Buck (1957: 330f.). Inken Köhler

Back to Hawaii
Back to Fishing & hunting