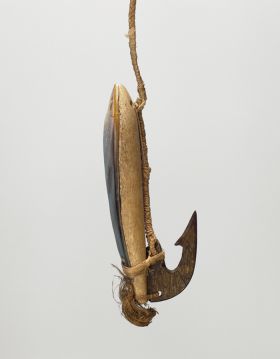 Humphrey No. 256: ‘A large Fish-hook, the Shank of which is made of Wood backed with Mother o’pearI neatly and ingeniously tied on, as is also a barbed Tortoiseshell hook to the end. From the Friendly Isles.’ (= Oz 213)

Humphrey No. 257: ‘another [large Fish-hook] exactly similar except that the shank is made of bone instead of Nood, from ditto [Friendly lsles].’ (=Oz 216)

One of three composite fish-hooks that are made of three components. The pieces Oz 211 and Oz 216 each have a shank of whale bone, with a 3-4 mm thick, whitish red-brown glossy slice of mother-of-pearl from the mussel Meleagrina margaritifera, sewn in twice. In the case of Oz 213, the shank is made out of a medium brown wood, carved and polished, and the rear is also fitted with a piece of mother-of-pearl shell. All three feature hooks made of tortoiseshell, each with one barb on the innermost side. Each hook has two holes at the base for attaching to the shank with whitish fau-fibres (Hibiscus tiliaceus). A cord lashing is missing in the case of Oz 213, as well as a bundle of fibres or a ‘beard’, attached to the end of the shanks of the other pieces as a lure. A twisted cord runs from the upper hole at the base of the hook to a hole at the upper end of the pointed shank along the inner side of the fish-hook, further secured by an additional cord. From this second cord, the fishing line olonga originates, braided in the examples Oz 211 and Oz 216, and thin and simply twisted in the example Oz 213. The three-component composite fish-hooks (Samwell in: Beaglehole 1967, lllb: 1045: ba) represent the classical Tongan type, and were apparently specifically used for catching bonito (Kaeppler 1978a: 235). Illustrations of such fish-hooks may be found in Labillardière (1800, Atlas, PI. 32, Fig. 27), Moschner (1955: 187, Fig. 50), Söderström (1939: 41, PI. 12, Fig. 4) and Kaeppler (1978b: 45, Fig. 80 and 111, Fig. 175). Comparable pieces are located in the collections in Stockholm (Sparrman Collection), Edinburgh, Vienna, Berne, Abbotsford, Oxford, Florence, Rome, Sydney, Wörlitz, and Wellington, New Zealand (cf. Kaeppler 1978a: 235). Inken Köhler, Ulrike Rehr, Gundolf Krüger