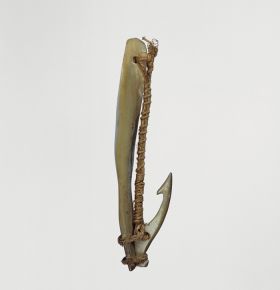 Humphrey No. 276: ‘a Fish-hook made of two pieces of Mother o’pearl, tied together from the Society Isles.’

The fish-hook consists of the shank and the hook, tied together with plant fibres, and both made of mother-of-pearl fragments of a certain shell (according to Kaeppler 1978b: 117: Meleagrina margaritifera). The slightly concave, shining white shank has a hole at its upper end with several thin bands and a twisted string threaded through it, these in turn firmly attached to the fishing line, aho. At the lower end, the shank is tied to the hook at two places. The lower fastening string is secured to a bulge on the hook. The upper string is threaded through a hole in the hook. This hole also serves to secure the line consisting of finely twisted strings, and runs along the inner surface of the shank up to its opening at the upper end. The hook, a glossy white on one side, and a matt dark brown on the other, has a tooth-shaped barb on its inside edge.

This compound fish-hook of the aviti type was used specifically to catch the bonito fish, atu (of the Thunnidae group). Barbs such as these are only found in bonito fish-hooks, aviti, and in fishing instruments used to catch octopus (cf. Oz 391), their purpose being to prevent too deep a penetration into the palate of the fish. The fish hook lacks the tuft or ‘beard’ customarily made of white pig’s bristles, which should be attached to the lower end and which is meant to represent the tail of a small fish (cf. Parkinson 1773: 75, PI. 13, No. 25; Banks 1896: 155; Moschner 1955: 187, Fig. 52).

Bonito hooks like these were used for fishing without bait, as the iridescent mother-of-pearl colour and the ‘glittering of the shank when moving, looked like little live fishes which the bonito tried to snap at’ (Moschner 1955: 186). The very delicately carved bonito hooks were of great value to the Maohi and were considered to be a special gift for a guest at the time of Cook’s voyages (cf Forster 1989, I: 277 and Nordhoff 1930: 238ff.).

Bonito fishing, belonging to ‘offshore fishing’, was conducted from a boat with a bamboo rod, owhe, with the line, aho, secured to the end and leading to the hook. When fishing for bonito, the Maohi orientated themselves by the flight of the birds, which drew their attention to the schools of bonito (Banks 1896: 155). In the Society Islands, fishing in general was the most important form of procuring food, as Cook (in Beaglehole 1955, I: 121) already pointed out. It did not serve a utilitarian purpose alone, but was also - particularly in the case of fishing for bonito - a very popular pastime, especially among the male members of the ari’i (cf. Oliver 1974, I: 281f.). Apart from fishing on the open sea with a rod, line, and fish-hooks, the following were the most important fishing methods in the vicinity of the reefs and lagoons in particular: fishing with nets, spears and with the bare hands, night-fishing with torches, rama, the use of fish traps, fish weirs and fish poison (cf. Bunzendahl 1935: 178-84).

A detailed description of fishing in the Society Islands is given by Ellis (1830, II: 294ff.) and Handy (1932: 69-110). A comparative study of ‘off-shore fishing’ in particular, which apart from fishing for bonito also included dolphin and shark fishing, was written by Nordhoff (1930: 137-73; 221-32). Two bonito hooks similar to the Göttingen specimens are held in the collections in Florence and Rome, and have been described by Kaeppler (1978b: 117ff.). Gundolf Krüger