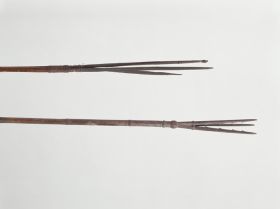 Both of these pieces belong to the group of three-pointed spears, used exclusively for fishing. The spears are made of a dark brown bamboo tube, with a three-part point made of a dark wood at the ends, attached with the aid of finely plaited coconut fibres. The three-cornered point of Oz 1519 (with a Humphrey label numbered 288) features four inward pointing barbs respectively, these cut out of the wood. The remains of a barb can be recognised in Oz 449 with the Humphrey number 287, however these were not cut out of the wood, but instead consist of small wood splinters (also inward pointing), tied up with coconut fibres. While the three-part point of the example Oz 499 is firmly tied to the bamboo shaft with a simple wrapping, in the case of Oz 1519, a string end runs upwards from this wrapping, also holding all three wooden tips with a firm wrapping.

In addition to fishing, as it appears to have been practised within the Tongan archipelago (especially on the island Eua), nets were predominantly used in the shallow lagoons. Fishing with spears was practised only rarely in Tonga compared to other South Seas regions (cf. Forster 1989, I: 340, 348; Gifford 1971: 146f. and Ferdon 1987: 225f.).