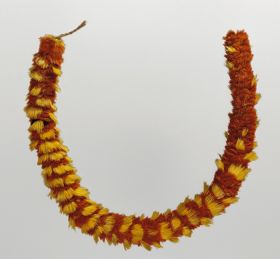 Humphrey No. 82: ‘a neat Array or Neck-Ruff formed of the beautiful yellow and crimson Feathers of the bird described N.o 345 & 346 put together with great ingenuity, from Sandwich Isles.’

The feathered necklace consists of yellow and red feathers, tightly arranged in circles. The red feathers outnumber the yellow ones. At regular intervals of about 1 cm, yellow feathers are inserted which protrude a little further than the others. Only a few yellow feathers are left at one end of the necklace; some have probably fallen out.

‘The true feather leis [lei hulu] are generally of uniform cylindrical section and either monochromatic (especially in the case of the more costly feathers) or made up of alternating bands or spirals of mixed colours. In some cases leis have longer feathers inserted at regular intervals giving a pleasing variety of form’ (Brigham 1899: 27). Yellow, red, green and black feathers of endemic birds were used for manufacturing the feather lei. The yellow feathers were considered the most valuable. The paler ones came from the ‘o‘o (Moho nobilis), and the nearly orange ones from the mamo (Drepanis pacifica), which were otherwise mainly black in colour. Today, both species are extinct. The bright red feathers were taken from the ‘i’iwi (Vestiaria coccinea) and the darker ones from the ‘apapane (Himatione sanguinea). The light green feathers came from the ‘o’u (Psittirostra psittacea). Black feathers were taken from the ‘o‘o because they could be obtained more easily than those of the mamo, which were restricted to the island of Hawaii (Buck 1957: 4; 218; 538f.). Samwell (in Beaglehole 1967, IIIb: 1180) noted: ‘Their Ornaments are of the Ereis [lei] or feathered ruffs which they wear on their Heads & round their Necks; they are very proud of these & wear sometimes 4 or 5 on their Heads & one or two about their necks & they have a very beautiful appearance.’ Buck (1957: 538) stated: ‘Feather necklaces (lei hulu) ... were among the cherished ornaments of the female aristocracy.’ Inken Köhler