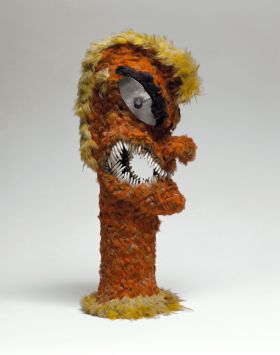 Humphrey No. 199*: ‘A Bust supposed to be an Idol, being a representation of a human figure, but frightfully distorted, with a Helmet on its head. ‘Tis formed of wicker work, overlaid with feathers; those forming the eyebrows black; the top of the Helmet, a collar at the bottom of the neck, and two spots above the eyes yellow; and the rest crimson; which feathers are of the same kind of birds as those of the Helmet-Cap and Cloak, described No. 44 and 53. The mouth is very wide, filled with teeth formed of Dog’s tusks: The Eyes which are made very large, are formed of long oval pieces of Mother o’ pearl for the white of them and a hard black wood for the Ball of them. The whole Image is singularly curious from Sandwich Isles.’

The feathered image is a representation of the war god Kuka’ilimoku. The base is made from plant materials, while the feathers which are attached to it are basically red. A crest is decorated with yellow feathers, as is the lower part of the neck. A few yellow feathers are also to be found where the ears would be, while the eyebrows consist of black feathers. The mouth of the image is open and fitted with dog teeth. The chin protrudes from directly underneath the mouth, while the neck is long and slightly widened at the base. The eyes are set diagonally with the lower edges pointing toward the middle of the face. They are made of mother-of-pearl with a dark wooden pupil in the centre. King (in Beaglehole 1967, llla: 512) described the ki’i hulu manu as follows: ‘... in the Center Canoe were the busts of what we supposed their Gods made of basket work, variously coverd with red, black, white, & Yellow feathers, the eyes represent’d by a bit of Pearl Oyster Shell with a black button, & the teeth were those of dogs, the mouths of all were strangely distorted, as well as other features ...’

The feathered images (ki’i hulu manu) or feathered gods (‘aumakua hulu manu), as Buck (1957: 503) referred to them, are yet another feature of the Hawaiian Islands. They consist of a head and neck piece to which feathers are attached. Some (such as Oz 254) also have a crest which extends across the head in a manner reminiscent to that of the feathered helmet. Others are decorated with human hair (Buck 1957: 503, 509). Inken Köhler