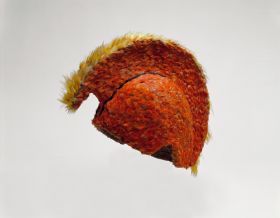 Humphrey No. 53: ‘A Helmet greatly similar to those of the Ancients, formed of basket work, with a high ridge, placed lengthways; the whole overlaid with the beautiful crimson and yellow Feather of the species of birds described No. 345 and No. 346, except two edges on the Cap next the ridge which are black formed of the feathers of the last mentioned bird. The yellow Feathers occupy the upper part of the ridge only. It has a truly majestic and military appearance, and is worn by the Chiefs of Owhyhee one of the Sandwich Isles.’

The base of the helmet consists of a wickerwork to which red, yellow, and black feathers are attached. A crest on the outer surface extends from the front to the back of the helmet.

In contrast to the feathered cloak, which was also found in Tahiti and New Zealand, the feathered helmet is peculiar to Hawaii (Buck 1957: 215, 231). Together with the feathered cloak, the crested helmet belonged to the insignia of the high chiefs, or later the king. Other helmets, which had mushroom-like ornaments on top, or which were decorated with human hair, were worn by warriors or lesser chiefs (Buck 1957:231). Inken Köhler