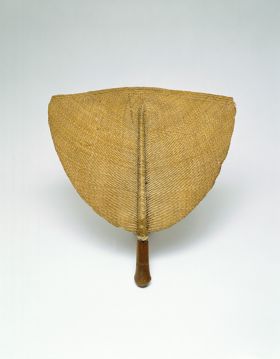 Humphrey No. 189: ‘Another [matted fan] very neatly worked on a wooden handle, from the Marquesas.’

The handle, c. 10 cm long, is made of medium-brown wood and is polished. It is flattened and ends in a slightly curved pommel. It shows traces of use. There is a 28.3 cm long fan mid-rib, hidden by wickerwork, inserted into the handle. This consists of a flexible stick ending in a pointed tip. The lower part (5 cm) has additional bindings. At the upper end, the plaited fan blade runs almost horizontally. Starting at the handle, the edges of the fan rise outwards in a curve. Fans of this type were made by women: ‘The women already have various tasks. They twist cords which are put to very diverse uses. They make fans for themselves and their husbands and various ornaments customary among them’ (Krusenstern 1811: 256).

‘The weather today was extraordinarily hot: hence, many of the natives had fans with them in order to cool themselves, and they sold a great many of them to us. They were quite large and consisted of a tough bark or a kind of grass which was tightly and artistically plaited together and partly coloured white with shell lime’ (Forster 1989, II: 24 and Pl. 1, No. 5, reproduction). Brigitta Hauser-Schaüblin

Back to Marquesas
Back to Baskets & fans