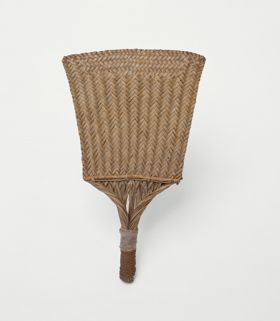 Humphrey No. 188: ‘a matted fan from Sandwich Islands.’

The fan is made of pandanus and is woven to create a pattern consisting of triangles. Its shape is that of a trapeze; the upper rim is wider. Along the lower rim, the fan is strengthened by a small wooden stick that is attached to it. Beneath this, the pandanus leaves are tied together into a bundle. This handle is wrapped with a piece of tapa as well as with plaited coconut fibre at the lower end.

The simplest kind of fan was made of young coconut palm leaves. However, finer peahi were also manufactured (Buck 1957: 138f.). Cook (quoted in Moschner 1955: 221 from the original publication of 1784) also described the appearance of the peahi: ‘... small square fans of mat or wicker-work, with handles tapering from them to the same, or of wood, which are neatly wrought with small cords of hair, and fibres of the cocoa-nut coir, intermixed.’ According to Kaeppler (1978a: 102), three different types of fans can be distinguished: feather fans, wicker fans, and pandanus fans. The more carefully manufactured fans were considered symbols of chiefly rank (Moschner 1955: 221). Inken Köhler

Back to Hawaii
Back to Baskets & fans