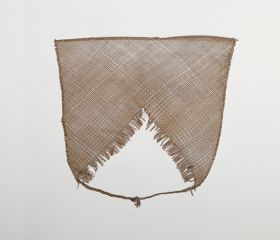 Humphrey No. 52: ‘a Tumataw, Bonnet or Sun-Shade of a very simple make, formed of matting, worn by the Women of the Society Isles.’

The eye-shade consists of a fine weave of fara fibres (Pandanus) reinforced by a trapeze-shaped frame made of thin wooden sticks. The loosely interwoven wooden sticks form the front and the side rims of the eye-shade, while the rear rim is cut out in a V-shape, with no stick reinforcement, so that it nestles softly against the forehead. The plaited strips, 2 to 3 mm wide, protrude by about 2 cm into the V-cut. From the weave at the two rear ends of the stick reinforcement, two braided twisted strings of the same material each protrude 10 cm. These serve to fasten the eye-shade at the back of the head. Finely plaited eye-shades such as the Göttingen example tended to be the exception (Bunzendahl 1935: 137). They were apparently worn mainly by women (Kaeppler 1978a: 131). Headbands made of split coconut palm leaves served more frequently as protection from the sun. Whenever needed, they could be fashioned within a few minutes by the women, and were mostly discarded again at sunset (cf. Banks 1896: 153f.). Gundolf Krüger