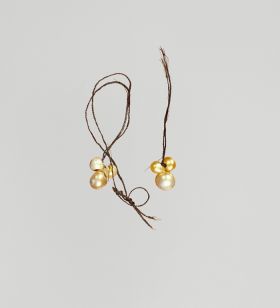 Humphrey No. 57: ‘a pair of Drops each composed of three Pearls, neatly drilled thro’ on one side, and tied together with plaited human hair, worn in their Ears by the Women of the Society Isles.’

The ornament consists of two ear pendants, each with three pearls. The pearls are perforated and threaded on to a thin thread twisted out of human hair, and partly damaged or frayed. The pearls of varying size shimmer white to golden yellow.

In addition to the flowers of plants such as tiare (Gardenia tahitensis) or tafifi (Jasminum didymum), which men as well as women put behind their ears, ear pendants were among the most important ornaments of the women, in particular those with pieces of mother-of-pearl, stones, berries, red paternoster beans, and pearls (Cook in: Beaglehole 1955.1:126; Parkinson 1773: 18, 75, P1.13, No.26). Such ear pendants were always worn on one ear only, while the other remained either without an ornament or was decorated with a flower (cf. Banks 1896: 132). Ear pendants exclusively with poe, pearls, were more of an exception, because pearl fishing was seldom carried out on most of the Society Islands, and the pearls were instead often acquired in trading with the Tuamoto Islands. Genuine pearls were therefore particularly valuable and were mainly in the possession of the nobility (cf. Banks, 1896: 121, 129; Bunzendahl 1935: 152f.).

The Göttingen ear ornaments may be considered very rare, since ear pendants consisting of pearls and/or other material are only to be found in other collections in Stockholm (Sparrman Collection), Cambridge, and Wellington, New Zealand (cf. Söderström 1939: 32, Kaeppler 1978a:132ff.). Gundolf Krüger