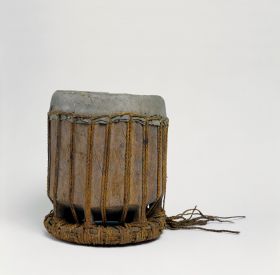 Forster Register A.15: ‘a drum from Otaheiti’

The example is a standing drum or an ‘open, single-skin cylindrical drum with zig-zag lashing’ (Hickmann 1981). The cylindrical sound-box made of wood rests on seven feet with a transition to a ring-like pedestal. Sound-box feet and pedestal are made as one piece. In particular, the heavy trunks of the trees, pu’a (Fragraea berteriana) and reva (Cerbera manghas) were used (cf. Oliver 1974, I: 328). The drum skin is made from shark skin. It is fastened with an encircling plaited cord of coconut fibres and a total of twenty-one pairs of plaited coconut strings tightly stretched from the covering to the ring-like pedestal and there, tightly wound round, covering almost the whole base of the pedestal. A Forster label is glued to the sound-box. The drum skin has a hole of about 15 x 10 cm not visible in a drawing of this object by J. F. Blumenbach and, hence, apparently absent at that time.

While (according to Oliver, 1974, I: 328f.) larger drums were beaten with sticks, the hands were used for the smaller ones, among which the Göttingen specimen may also be counted. The larger standing drums produced a deep tone and were used on the occasions of religious celebrations, sacrifices, or of the illness or death of a respected person (cf. Moschner 1955: 247; Kaeppler 1978a: 138; Oliver 1974, I: 330; Henry 1928: 1560). The Göttingen example must have been used mainly as an accompanying instrument for dances and songs on festive occasions, heiva. In addition to nose flutes, standing drums of the Göttingen type were the most important musical instruments. Specimens similar in size to the Göttingen object are located in the collections in Dublin, Oxford, and Berne (cf. Kaeppler 1978a: 140). Gundolf Krüger

Back to Tahiti & Society Islands
Back to Music & play