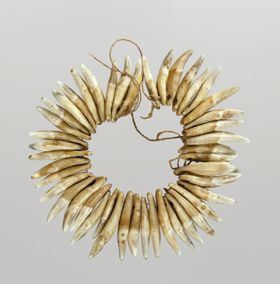 Humphrey No. 76: ‘Another [Necklace] formed of Dog’s Tusks strung thro’ holes made in the roots, from ditto [Sandwich Islands].’

Forty-five dog teeth, drilled through at the roots, are strung together on a cord consisting of a plant material.

Humphrey’s classification of the object as a necklace is questionable. It is more likely that the teeth were collected together on the cord until there were enough of them to manufacture the typical Hawaiian leglet of dog teeth. Buck (1957: 545) stated that: ‘The canine teeth of dogs (‘ilio) with holes drilled through the root and strung on a cord have been regarded as dog-tooth necklaces (lei ‘ilio). They may have been used temporarily as such, but it is more likely that they were so strung until a sufficient number had been collected to make the dog-tooth leg ornament characteristic of Hawaii.’ Concerning this kind of object, Buck (1957: 553) wrote: ‘Dogtooth leg ornaments (kupe’e niho ‘ilio), worn by men dancers, are peculiar to Hawaii.’ Inken Köhler