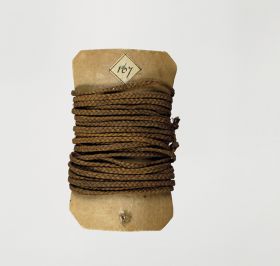 Humphrey Nos. 159 to 169: ‘Eleven specimens of neatly plaited Cordage, each different, formed of the fibres of the Cocoa Nut, and other plants, from the Society and Friendly Isles.’

Four of the cords listed by Humphrey can be attributed to the Society Islands. The braided cord Oz 367 is made from light brown plant fibres. It is wound round a piece of thin cardboard and is probably about 140 cm long.

The braided cord Oz 368 is made of coconut fibres, niu or ha’ari (Cocos nucifera) and wound into a ball. Its length is probably about 250 cm. The Humphrey number 163 is glued to the cord.

The very finely plaited cord Oz 376 is also made from coconut fibres. Like cord Oz 367, it is wound round a piece of cardboard and is probably about 250 cm long. The Humphrey number 167 is glued to the cardboard.

The braided cord ‘Hanover 1854, No. 14’ is once again made from coconut fibres. It used to be wound round a piece of cardboard with the remains of a Humphrey label (without a discernible number) glued on. The cord was unwound when photographs were being taken. At the same time, it was thus possible to measure the exact length of the cord as 604 cm. In addition, however, the colleagues S. Krull and H. Haase made an interesting discovery: the pieces of cardboard round which the cord was wound turned out to be what are without doubt two old English playing cards. One of them has the faintly visible imprint ‘Suppreme’. One of the two cards is a diamond and the other a club. The corresponding symbols are well preserved on both cards. The question remains as to whether the cords were already wound round the playing cards at the time of acquisition, or only later in London to store or forward them.

Cords, especially made from coconut fibres, were among the main items of hardware in the Society islands. Because nails were unknown until the arrival of the Europeans, joining objects together - from house beams to boat planks, making bindings for tools such as adzes, or making fishing lines - all had to be carried out with cords of varying strengths. Gundolf Krüger