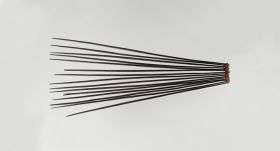 Humphrey No. 186 & 187: ‘Combs or Scratch-heads, from New Caledonia, made of long thin sticks of Wood, one end of each of which has a little knob & at which end they are tied with twine. The Wood of one is yellow, of the other black.’

The comb (head scratcher) Oz 691 consists of eight very slightly curved wooden pins 2 to 3 mm thick. These end in a point at the bottom; towards the top end, where they are tied together, they taper off and form a spherical head. The tip of one of the outer pins is broken off at a length of 4 to 5 cm. Along the grain, the colour of the wood alternates between medium brown and yellow. The still-existing tips of the pins all exhibit a partially rubbed off light-grey coating for about 1cm. At the upper end, the pins are tied together parallel to each other with a string made of two thin strands. A strand made of red fibres is sometimes intertwined in this string. The comb (head scratcher) Oz 692 is similar, except that this comb has fifteen pins, four of them having broken off at a length of about 3 to 4 cm. The pins are made of black wood. Unlike the other head scratchers, there is no recognisable grey coating on the tips. The binding of the pins at the upper end consists of a plaited cord which was evidently red. Very definite traces of this red colour still remain.

The two combs can be correlated with the Humphrey Nos. 186 and 187. Neither a typical rhomboid Humphrey label nor the remains of one can be found on either of the two combs. However, the relatively precise details in Humphrey’s catalogue entry leave little doubt that the two combs did in fact come from the Humphrey Collection, and therefore from Cook’s second voyage.

Similar combs may be found in the collections in Vienna, Oxford, Stockholm, Sydney, and Florence (Kaeppler 1978a: 242f.). Volker Harms

Back to New Caledonia
Back to Combs