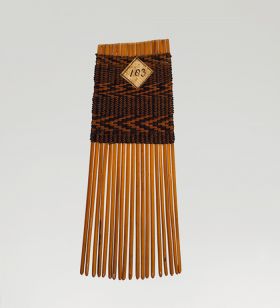 Humphrey No. 183 (180-184): ‘Five varieties of Combs from the Friendly Isles made of small sticks of bamboo, fastened by a kind of Wicker-work made with Cocoa nut fibres, some of which being coloured black are wrought into various figures. Out of several dozens of these Combs which have been brought very few are alike which shows the great natural taste for invention these ingenious Islanders have and the great pains they take to complete their performances. The like might be said of their other Manufactures.’

The comb features nineteen light brown small sticks from the midribs of coconut palm leaves, held together at the handle by a weave. This weave (half-woven or plaited) consists of blackish-brown and reddish-brown strings and fibres, forming three rows of a herring-bone pattern (Chevron). The weave begins directly beneath one end of the comb and is 4.7 cm long. The sticks radiate outwards like a fan at the other end.

According to Forster, combs of this type were worn as ornaments by the women: ‘we also traded for a type of comb which served more as an ornament than for any other use, consisting of a number of small flat sticks, which were about five inches long, cut from the yellow wood of the bamboo, and at the upper end almost delicate however, attached to one another by a colourful mixture of brown and black coloured coconut fibres ...’ (Forster 1989, I 348). According to Mariner (1817b: 295) the manufacture of the combs was divided up between higher and lower ranking women, for the: ‘making of combs, the teeth of which consist of the mid-rib of the cocoanut leaf, is also an employment of women of rank. Making thread is an occupation of females of the lower order: it is performed by twisting the separate parts of the thread, in the act of rolling them with the palm of the hand along the thigh, and by a return of the hand, twisting them together the contrary way. The material of the thread is the prepared bark of the olongá.’

Mariner, William, An Account of the Natives of the Tonga Islands in the South Pacific Ocean, 2 vols, London, 1817.

Back to Tonga
Back to Combs