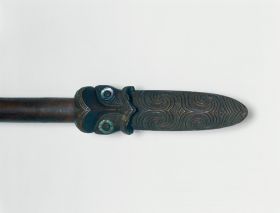 Forster Register A. I (?): ‘a long Patapatu from New Zealand.’

Club made of heavy brown wood, the grip end decorated with line and facial ornaments, the eyes inlaid with mother-of-pearl shell; two eyes are damaged, one mother-of-pearl inlay is missing. The long clubs were used not only as chief’s staffs, but also as weapons for striking and stabbing. Buck (1952: 274) distinguished between the following types of long club: pouwhenua, tewhatewha, and taiaha or hani. These all feature a cutting edge for striking and a sharp point for stabbing, and can thus be considered a combination of spear and club. Buck considered the taiaha type to be the last to be developed. While the other long clubs were decorated along the shaft, the taiaha is decorated at the tip, which was used for stabbing. The area of decoration is rather larger here, the tip representing the tongue of a face. The taiaha were otherwise often embellished with tufts of white dog hair and red feathers. Hence, they often served as showpieces and were held in the hands during official addresses. The taiaha were widely distributed (Best 1924, II: 247). Markus Schindlbeck

Back to New Zealand
Back to War