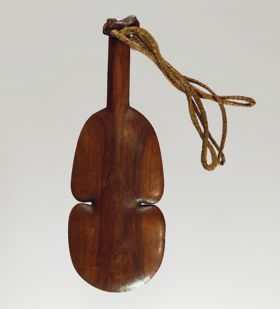 Humphrey No. 337: ‘another [patapatoo] used by ditto [Warriors of New Zealand], of a singular shape, also made of wood.’

Flat wooden club, hole drilled through at the grip end, with plaited band drawn through three times to make a strap. Short clubs were made of wood, bone, or greenstone (nephrite). The latter had great rarity value and were handed down from one generation to the next. The Maori distinguished between three types of club: mere, kotiate, and wahaika. The mere was the simplest and was made of stone, bone, or greenstone. According to Buck (1952: 277), only the greenstone clubs should actually be referred to as mere. The stone clubs were called patu onewa, and those of whalebone patu paraoa. The mere is decorated with parallel grooves at the grip end. The kotiate features a broader blade and is shaped like a violin. According to Buck, the kotiate were mostly made of whalebone; however they were often fashioned out of wood for the Europeans. The wahaika was a one-sided mere, with a concave indentation on one side for the image of a face or figure. The sharp edge at the end of the blade is a common feature of all clubs. A piece of dog skin was usually drawn through an eye and wound into a strap to fit over the thumb and hand. The patu were used in close combat and would be thrust forward. According to Banks, they were ‘most admirably calculated for the cracking of the sculls’ (Beaglehole 1963: 27), and were worn on the belt. Banks considered their functions both as weapons as well as ornaments to be comparable to those of the European sword.

Back to New Zealand
Back to War