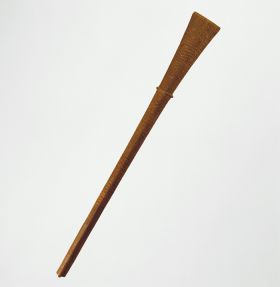 Humphrey No. 299: ‘Another [war club] like the last mentioned in shape, and most elaborately carved throughout in a great variety of singular figures, among which are imitations human kind. Birds, Lizards, Fishes, a Turtle, and is another instance for the patience and ingenuity of the Natives of the Friendly isles.’

The club is made of brown wood with a handle which is round in cross-section. Towards the upper end, the club becomes wider and the cross-section rhomboid. The upper end is separated from the handle by a bulged ring. The entire club is ornamented with curved or zigzag lines and other patterns, as well as with representations of human figures, fish and turtles. There is otherwise a small knob at the end of the handle.

‘Most [of the Tongan clubs] were made of the hard, heavy wood of the toa tree, Casuarina equisetifolia’ (Ferdon 1987: 258). They differed in their appearance.

Concerning the decorated clubs, Mariner (1817b: 278) explained that the Tongans ‘... only ornament those clubs which are considered good on account of their form, or the quality of the wood, or those which have done much execution: to the latter it used to be the custom to give a proper name.’ Ferdon (1987: 259) therefore concluded that ‘(d)ecorated clubs were not necessarily a symbol of the high rank or status of their owners.’ Concerning the decorated clubs, Moschner (1955: 152) was unsure as to whether or not they were used in battle, had a symbolic function, or were needed for religious purposes. The latter function was also emphasised by Giglioli (in Kaeppler 1978b: 106) in writing that ‘very ornate Tongan clubs with carvings were not always used as weapons, but symbolized the god of war; in this case they were kept covered with ngatu (bark cloth) and were carried at the head of the army to assure victory.’

A more detailed description of the engraved patterns is given by Anderson (in Beaglehole 1967, Illb: 941). He mentioned lines, little triangles, and other figures. Greiner (1971: 70) stated that the triangle was the most common design on the Tongan clubs. In addition to those designs mentioned by Anderson, she named dogs, centipedes, octopuses, lizards and turtles.

Forster (1989, I: 349) hypothesised that the carvings were incised with a sharp-edged stone, a piece of coral, or a shell. This is also confirmed by Peter (1990: 146). He concluded that the carving was made with tools made of tooth, stone, and shell. A shark’s tooth was used for the precision work.

The club was ‘...undoubtedly ... the principal Weapon used in their Wars ...’ (Samwell in Beaglehole 1967, Illb: 1028). According to Mariner (1817b: 94), the work of the ‘toofoonga tongo acow (club carvers, or engravers of the handle ...)’ did not belong to the category of hereditary professions. Rather, ‘[t]he arts ... are practised by any one who has a natural turn that way.’ In a different context, Mariner (1817b: 278) stated that ‘(t)hose that make these ornaments are chiefly canoe builders.’ Canoe building, however, indeed belonged to the hereditary professions (Ferdon 1987: 110f.). Inken Köhler, Ulrike Rehr, Gundolf Krüger

Back to Tonga
Back to War