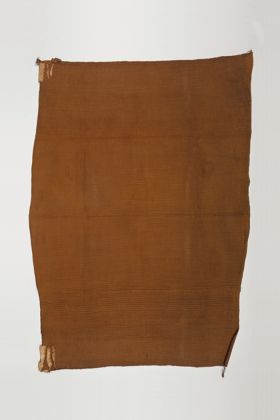 Humphrey No. 42: ‘Another [Cloak] stained of brick-dust Colour, from ditto [New Zealand].’

Hand-woven cloak made of flax, dyed dark brown. Thick, doubled fibre cords, in a simple twist binding, are found on both long sides as borders, some darker in colour. The intervals between the aho (weft) are small, not more than 1 cm. The aho are in a double twist binding and are arranged in vertical rows. One small and three long pieces of dog fur respectively are attached to the two opposite corners at the ends of the long sides. The bordering of the fabric is a so-called ‘thrum commencement’ (Pendergrast 1987: 16), i.e., the whenu (comparable to warp) end in loose strands. Many cloaks and capes were acquired from the Maori on Cook’s voyages, according to Kaeppler (1978a: 171) at least forty pieces. The earliest travellers often described and also depicted these cloaks. Forster (1778/80, I: 171) wrote: ‘Their clothing is a form of cloak, made of a four-cornered piece of material. The two uppermost ends of these are fastened together at the front on the breast, either with bands, or they fasten these together with a needle of bone, whalebone or green stone. Roughly in the middle of the cloak is a belt of tightly plaited grass, fastened on the inside, which can be wound around the body, so that the cloak then lies firmly on the hips, and the lower ends hang down towards the knee, sometimes even as far down as the calves.’

Cook described various cloaks on his first voyage. One of these corresponds to the type of the Göttingen cloak: ‘the other is formed by many threads lying very close one way, and a few crossing them the other, so as to bind them together... It is made in a kind of frame of the size of the cloth, generally about five feet long, and four broad, across which the long threads, which lie close together, or warp, are strained, and the cross threads, or woof, are worked in by hand, which must be a very tedious operation’ (Hawkesworth 1773, III: 454f.). On the very valuable strips of dog fur, he remarked: ‘but the great pride of their dress consists in the fur of their dogs, which they use with such economy that they cut it into stripes, and sew them upon their cloth at a distance from each other’ (Hawkesworth 1773, III: 455). By contrast, feather cloaks were rare at that time.

The cloaks and capes in the Göttingen Collection are generally the so-called simpler cloaks. Mead (1969: 60) characterised them as follows: the cloaks were made of bleached fibres of high quality with a very soft texture, so that they could be worn immediately next to the skin, i.e., on the inside. They were laid over the shoulder, around the hips, or they enveloped the entire body. In general, embellishment was restricted to coloured warp, or to fringes of the ends of warp threads. They were primarily worn by chiefs, older men, and perhaps also by women of high standing. Mead called these cloaks mai muka, there being apparently no equivalent Maori term for this type. Markus Schindlbeck