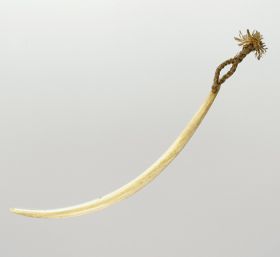 Humphrey No. 194: ‘Another [Needle] used for the like purpose [to fasten their Cloaks with] by the same people [Natives of New Zealand] made of the ivory tusk of some large marine animal.’

Needle made of whalebone, hole drilled through at one end, with a strap of twisted cord. Cloak fasteners were made out of whalebone or other bone, mussel shells and greenstone, and were either perforated or notched, so that they could be fastened to the cloak with a cord. There were three forms: those that were straight or only slightly curved, those that were J-formed and sharply curved near the tip, and those that were semicircular. The second type was the most common (cf. Buck 1952: 287). The cloak fasteners held the corners of the cloak together at the right-hand side. They were fastened with the cord to the collar edge of the cloak above the right shoulder. The term au relates to the Polynesian word for the needles, which were used to sew roof coverings. The term rei relates to whalebone material: au rei however is a general term for cloak fasteners. These cloak fasteners otherwise served as ornaments. Respected members of the tribe would often wear several together in a bundle, so that they rattled together.

According to Buck (1952: 287), the cloak fasteners were a local development peculiar to the Maori. Sinoto (1968) however, tried to prove that they were also present in prehistoric times on the Marquesas.

Cloak fasteners were collected on several occasions during Cook’s voyages. They mostly appear to be made of bone (cf. Kaeppler 1978a:179). Markus Schindlbeck