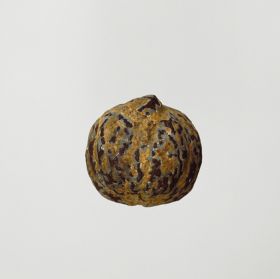 Humphrey No. 204: ‘Two nuts of the Tree culled by Linneus Telopoa-perspicuca and by the Natives of Otaheite E tootooe which yield a very fat kernel of which those people make their black Dye used in tataowing or marking their skins, which dye they procure by burning the nuts, and receiving the smoke. Strung upon a reed or stick they serve for Candles and give a very good light.’

The walnut-like nut tiairi of the candlenut tree (Aleurites triloba) was part of the equipment used for traditional tattooing in Polynesia. Its soot, collected in a coconut bowl and mixed with water and/or coconut oil, served as the dye for tattooing. The blackening of the aforementioned tattooing combs or mallets was caused by this kind of dye. The surface of Oz 442 is light-brown in colour and badly splintered in places. The underlying layers range from light-grey to blackish-brown in colour. In contrast to Oz 442, object Oz 443 has a lustrous surface of a grey or brownish-black colour. Instead of the word ‘candlenut’ . Cook (in Beaglehole 1955, I: 125) and Banks (1896: 129) used the term ‘oil nut’. Apart from the term tiairi, the word tutui (derived from: to light, to set fire) is frequently found to have the same meaning as ‘candlenut’ (in Humphrey: tootooe). Gundolf Krüger