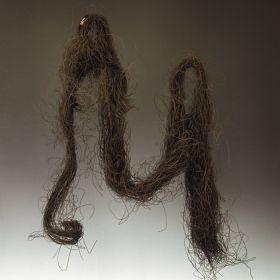 Humphrey No. 55: ‘Hair of the Natives of the Society Isles, of a jet black, curiously plaited by the Women of those Countries, and formed into long hanks, which, rolled in form of a Turban, they wear on their heads, and much esteem, on account of the great length of time requisite in making one of them.’

The very finely plaited strings are made of black human hair, loosely and unevenly twisted into a long bundle, partly in loops. A Humphrey label, with the final digit 5 discernible on its fragment, is glued on the bundle. Humphrey’s annotation above shows that the attribution of inventory number Oz 113 to the Humphrey number 55 must be correct.

On the occasion of the dance feasts, heiva, the female dancers of the arioi alliance sometimes wore a turban-like ‘head-dress’, tamou, consisting of a web of great quantities of human hair and wound round the head (Forster 1989, I: 332).

Banks (1896: 132) acquired several tamou which were artistically wound several times round the head without being tied, the strands with an overall length of more than an English mile. This hair ornament was often supplemented by feathers or white flowers (e.g. Morinda citrifolia, cf. Söderström 1939: 33). In addition, Banks also mentioned festive occasions where men wore arrangements made of hair, rather like a ‘wig’, on the back of the head.

Apart from this function as a ‘head-dress’ or ‘wig’, finely plaited strings made of human hair were also used as the material for making decorations for bows and quivers, as well as being used for suspending ear ornaments. They were painstakingly made for this purpose by the women and kept in reserve, and were made either from their own hair, or that of deceased relatives or friends (cf. Bunzendahl 1935: 99, 152, 155). Gundolf Krüger