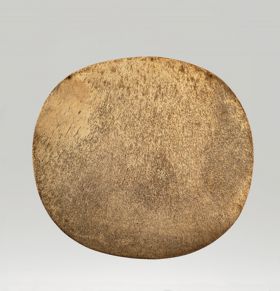 Forster Register A.14: ‘a shield from Otaheiti’

The breast plate is made of bone, almost round and slightly curved. The surface is even on both sides, with one side additionally polished. Two holes are drilled through the plate very close to the rim, about 31 cm apart.

Because the Tongans depended on stranded whales (rather than on hunted) in pre-European times, the teeth and bones of whales were rare and therefore very valuable. In Tonga, only the chiefs had the right to possess them. Since it is unlikely that breast plates were manufactured regularly, or were even typical insignia of the chiefs, this object was probably made especially for a particular individual (Plischke 1939:136). It is not the only one of its kind, however. Another breast plate collected on the second voyage is now located in the Pitt Rivers Museum in Oxford (Kaeppler 1978a: 211). Inken Köhler, Ulrike Rehr, Gundolf Krüger