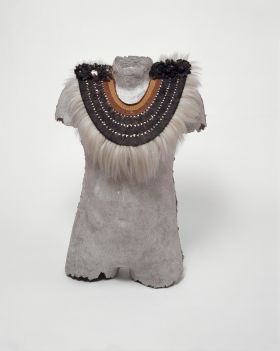 Humphrey No. 102; ‘A very singular kind of Breastplate worn ... by the Natives of the Society Isles, and by them called Taowmee. ‘Tis of semicircular shape, having a place made between the two angles for the Nek; and is composed of twigs placed circularly, which are tied to others put across them; over these is a layer of plaited Cordage made of the fibres of the Cocoa Nut or some other plant, interwoven, and fastened to the Twigs with twine: over this is placed, beginning at that part which goes to the neck, first, an edge or Collar of plaited Cordage, to which is fastened a string to go round the neck; then two semicircular rows differently coloured of the like Cordage neatly interwoven, afterwards three corresponding Rows of sharks teeth/ formed by tying the teeth side by side through two holes made in the Roots of each near the edge, to a stick/ and the like number of Rows of the beautiful dark green feathers of the poee bird (a kind of pigeon, of a new species, peculiar to these islands) alternately placed, which are terminated at the end with six bunches of the like kind of feathers, three on each side, in the centre of each of which is a round piece of Mother o’pearl. The whole, except the part for the neck is bordered with fine white Dog’s hair, curiously tied together in small bunches, & confined on the back of the ornament with two circular Twigs, to which, and to the other Twigs they are strongly sewed, and thus finished the Taowmee makes a most grand appearance, extremely pleasing and uncommonly nouvelle.’

This taumi is an almost complete specimen with all the ornamental components present. Only at the upper left side of the neckline are some of the feathers missing which form the wreath around the mother-of-pearl discs mounted there. The object consists of all the materials mentioned for the comparable pieces Oz 426, and Hanover 1850 (?), No.1, as well as for the tassels of hair Oz 432 and Oz 433. The only addition is a pale plant fibre material intertwined with a coconut fibre string, attached at the upper edge of the neckline on both sides to a 2 cm high additional frill made of diagonally plaited light and reddish-brown coconut fibres. The latticework, 12 cm wide, consisting of cane slips - sixteen running lengthwise and eighteen crosswise - and the coconut fibre weave over it, are firmly tied together, as are the tufts of white dog’s hair, up to 10 cm long and protruding outward from the lattice work. On the front, three rows of shark’s teeth and three strips with pigeon feathers - cut back to a length of 3 cm - are attached to the coconut fibre weave. Two diagonally plaited strips, 2 cm wide, form the inside border of the neckline. The outside strip is plaited from reddish-brown coconut fibre, while the light-brown material of the inside strip cannot be identified as coconut fibre with any certainty. Three mother-of-pearl discs, each with a diameter of 3 cm, are mounted on each of the two upper edges of the collar, as is a wreath of feathers surrounding them. In its completeness, this object best corresponds to the gorget a ‘kind of priest’ (more likely to be a warlord) wears in one of Parkinson’s illustrations (1773: 71, Pl. 11). Gundolf Krüger