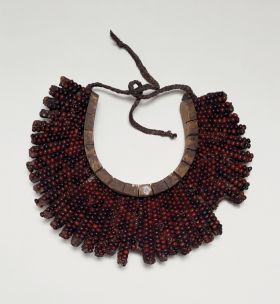 Humphrey No. 103: ‘Another kind of Breast plate, formed of pieces of light soft wood tied together, much in the shape of the Taowmee, with plaited twine, the ends of which serve to fasten it to the neck; the whole of the wood, except a kind of raised Collar round that part which is placed to the neck, and that which goes next the breast is covered over with the beautiful red and black tropical pea, fastened by a kind of gum, and is worn by the Natives of the Marquesas Islands.’

The gorget, decorated with paternoster beans, consists of a crescent-shaped base made of sixteen individual trapezoid pieces of light wood almost seamlessly joined together. At the upper end, where they are in direct contact with the wearer’s neck, they flare outwards at right angles and, by about 1 to 1.5 cm, protrude above the slightly concave plane of the wooden collar decorated with paternoster beans (Arbrus precatorius). The front side of the gorget exhibits only this evenly flaring part of the wooden base. The main surface of the gorget is completely covered with paternoster beans arranged in vertical rows more or less at right angles to the wooden collar. The beans are pressed into a relatively deep layer of resin. This decorative surface rises approximately 2 cm above the wooden base at the lower end. A plaited band has been attached to each of the two upper ends of the gorget, serving the fastening of the ornament.

‘The commanders wore a kind of circular collar which hung down on the chest as an ornament. It consisted of small pieces of a light, cork-like wood glued together with resin and forming a semicircle. A large number of red beans (Arbrus precatorius Linn.) were also attached with resin numerous rows 2 to 3 inches long’ (Forster 1989, II; 19, 32 PI. 1, No. 3).

Linton mentioned that the resin is that of the breadfruit tree. Regarding the segmented structure of the wooden base, he wrote: ‘It is rather curious that the Marquesans should have made a rigid collar of many sections when it would have been much easier to cut it in a single piece. The most plausible explanation for its composite construction seems to be that the idea was borrowed from the necklaces of pandanus fruit which had much the same shape’ (1923: 428f.).

Krusenstern wrote of ‘Ringkragen’ (circular collars) and assigned them to a highly specific group of wearers: ‘This decoration only distinguishes the priests’ (1811: 15). The collars from the Salem Peabody Museum published by Linton (PI. 78, C), are shown in two examples from the rear. A comparable piece is to be found in the Pitt Rivers Museum in Oxford (No. 133, Fig. 99 in: La découverte de la Polynésie 1972; cf. Kaeppler 1978a: 166f.; she stated ‘Forster collection’ for this piece). Kaeppler (1978a) located further examples in Dublin and Stockholm collected during Cook’s voyage. Brigitta Hauser-Schaüblin