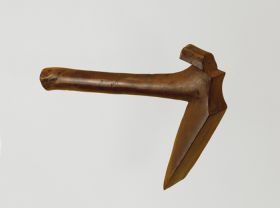 Humphrey No. 224: ‘a kind of Hoe or adze in shape like to the Stone adze no. 210, made out of a hard sort of Wood, from Yoolee-Eteea, one of the Society Isles.’

In form, this adze carved from a piece of dark brown hardwood corresponds fully to the adze with a stone blade Oz 361 (Humphrey No. 210). As with the latter, this specimen also has a ‘T-shaft’. No string lashing is necessary because the blade and the shaft are made of one piece, so that the tapering, stepped tang of the blade is clearly visible. The blade, with its very fine finish and polish, appears extremely large in relation to the handle and the shaft, and corresponds in its proportions to two comparable pieces in the collections in Cambridge and in Berne (cf. Kaeppler 1978a: 150, Fig. 267; Kaeppler 1978b: 52, Fig. 93). These, however, have neither a ‘T-shaft’ nor a hook-shaped angle-joint.

Triangular adzes made of wood were used to split the fruits of the breadfruit tree, uru, (Artocarpus incisa) before these were baked like dough (mahei: Forster 1989, I: 307) in the earth-oven, umu, or made into poi or popoi mush (on the preparation of breadfruit as an important staple food, cf. Forster 1989, I: 236; Cook in: Beaglehole 1955, I: 122; Henry 1928: 39f.). The early literature sources do not indicate at which stage the fruit was picked and split with the adze. While Ellis (1830, II: 54) briefly described the latter as a household implement, there is no longer mention of it at all in Wilder (1928), whose research centered on the breadfruit on Tahiti. It is impossible to say when such adzes fell into disuse. From Oldman’s (1943: 3) reference to the two breadfruit splitters in his collection, it may be gathered that - being part of an ‘old missionary collection’ - they were still in existence upon the arrival of the first missionaries (1797). Gundolf Krüger

Oldman, WO, The Oldman Collection of Polynesian Artifacts. Memoirs of the Polynesian Society, New Plymouth, 1943, vol. 15.