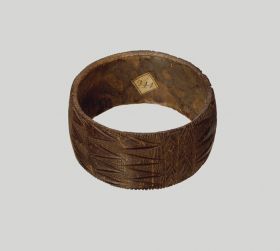 Humphrey No. 344: ‘a Fence worn on the Arm to keep off the Twang of the bow-string, made of a Cocoa-Nut singularly carved from Malecola one of the Hebrides.’

The bracelet has been sawn from the central strip of the hard shell of a coconut. A zigzag pattern has been cut into the outside, running all round in a repeat pattern. The pattern is interrupted by a diagonal strip in two places. The diagonal strips feature a herringbone pattern.

The object still features the old Humphrey label (No. 344) on the inside. The function as given by Humphrey’s catalogue entry is probably incorrect. Because of the inside measurements, the bracelet may only have been worn as an ornament on a man’s upper arm.

Back to New Hebrides (Vanuatu)
Back to Jewellery & adornment