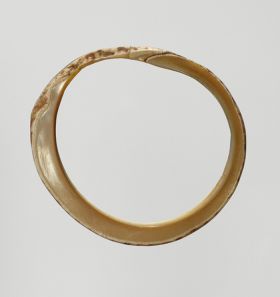 Humphrey No. 107: ‘A bracelet made of the bottom twirl of a large pearly Trochus Shell [the Zebra], and worn on the small part of the arm by the Natives of the Friendly Isles.’

The bracelet consists of the lower part of a trochus shell with the overlapping of the whorls of the snail shell clearly visible. Trochus snails are white on the outside, mostly with red stripes. This colouring has also been preserved in the bracelet, polished only on the inside and at the upper edge thus: ‘The trochus bracelets were made by putting the tip of the shell into the fire. In this way, the tip became brittle and could easily be knocked away with a stone. The remaining ring was polished on the outside on a stone slab, on the inside with a branch of coral’ (Speiser 1923: 187).

Humphrey’s catalogue entry above lists the ‘Friendly Isles’ as provenance. However, this can be assumed to be wrong, given the knowledge of ornaments customary in Tongan culture. Speiser (1923: 185-87) emphasised that such trochus shell bracelets are found on the following New Hebridean Islands: Malo, Malekula, Ambrym, Pentecoste, Aoba, Maevo, and the Banks Islands. Volker Harms

Back to New Hebrides (Vanuatu)
Back to Jewellery & adornment