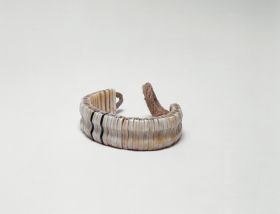 Humphrey No. 109: ‘A beautiful and curious Bracelet formed of 47 pieces of Ivory or teeth and two pieces of some substance appearing like Jet; each of the 49 pieces is drilled thro’ with two holes and strung on Cords the ends of which serve to fasten the bracelet to the Wrist. The pieces are made to fit so close that at a distance they appear like one, and the two black pieces (placed near the middle) appear like two stripes, which set off the whiteness of the Ivory. There is a grove made all round the bracelet across the joints and the whole forms a neat and elegant ornament, from Sandwich Isles.’

Forty-seven flat pieces made of tooth as well as two darker ones made of turtle shell are strung together on a cord. The two darker pieces are located close to the middle. Between these are two lighter ones. Each of the forty-nine pieces is drilled through twice. The cord is threaded through these holes, ending at one side as a loop and plaited together at the other. A semicircular cavity is engraved in the middle of each piece at the outer side of the bracelet. Thus, the cavity extends from one end of the bracelet to the other.

This type of bracelet is described by Kaeppler (1978a: 96) as follows: ‘[It] was composed of shaped pieces of turtle shell combined with carved pieces of ivory, or dog teeth.’ These bracelets were worn by female ali’i (chiefs). ‘Chiefesses wore bracelets made of plates of turtle shell interspersed with sections of bone or ivory’ (Mitchell 1982: 102). Cook (quoted in Moschner 1955: 211 from the original publication of 1784) stated: ‘The women also wear bracelets of ... pieces of black wood, with bits of ivory interspersed, well polished, fixed by a string drawn very closely through them ...’