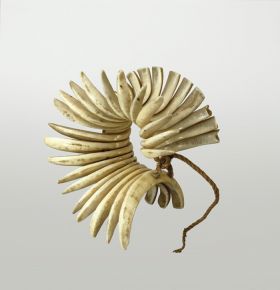 Humphrey No. 110*: ‘A curious Ruffle, or Bracelet, formed of 22 large Hog’s Tusks, 11 of each side of the Jaw, half placed on one side, and the opposites on the other side: they are tied together side by side, thro’ a hole made in each by a Cord; the hole is so contrived that the Cord is not seen; and the teeth are neatly sized and fitted to each other, and nicely smoothed and polished [from Sandwich Isles]. Vide Ellis’s Narrative Vol. 2 page 157.’

The bracelet consists of twenty-two boar-tusks (one being damaged) strung together evenly on a cord. The natural curve of the tusks is used to give the bracelet a concave form on the outer side.

‘Bracelets of boar tusks (kupe’e ho’okalakala) were made of 19 to 24 tusks matched as to length and with the hollow root ends in the same direction. The tusks are naturally curved and triangular in section with the base on the concave side. Two holes were drilled 1.5 to 1.75 inches apart from side to side of each tusk, and the tusks were arranged with the concave length outward. A long olona cord was threaded through the upper set of holes, looped downward, and threaded back through the lower set of holes’ (Buck 1957: 546). Concerning the use of the bracelets, Mitchell (1982: 121) stated: ‘Each man might wear a pair of them while dancing.’ Inken Köhler