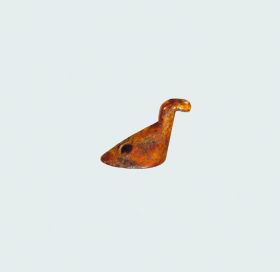 Humphrey No. 95: ‘Another [bone trinket] in imitation of a Water bird from ditto [Friendly Isles].’

This markedly patinated figure is a stylised representation of a water bird, resting on a flat, oval base. A conical bore-hole leads from the base to the bird’s right-hand rear body. Humphrey gives the provenance incorrectly as ‘Tonga’. This may be a systematic error, because a very similar figure is threaded on to a Tongan chain in the Cook Collection in Dunedin, New Zealand (Kaeppler 1978a: 208, Fig. 418). There is another figure of this type in Sydney which has been attributed to the Aleut by Kaeppler (1978a: 270-71, Fig. 598). Four (probably) similar bird figures from the third voyage are now missing (Kaeppler 1978a: 271).

Neither written nor pictorial sources of the third voyage give any indication of function of the figure. Other bird figures of this type, although somewhat more refined, occur as hat ornaments on some Aleut conical bent wood hats (cf. King 1981: 49, PI. 14; Varjola 1990: 172f., 175, Fig. 243-44, 248-49). Others have suggested that the figures served as game pieces (Kaeppler 1978a: 271), an assumption probably based on Culin (1907: 102-04), who found evidence of identical forms as game pieces among the Eskimo of the Central Arctic; one source documented the game for the Chukot Peninsula. Similar objects from Alaska and from the Siberian Eskimo (including the bore-hole) are generally described only as carved pieces, or as part of the personal ornamentation.

In the Göttingen collection of von Asch (Inv. Am 756), there is a ‘chain’ consisting of a large number of such bird figures which are threaded on a string. The exact origin and function of these figures (or the ‘chain’) is also unknown (König 1993: 52). Christian F. Feest

Varjola, Pirjo, The Etholéen Collection. The Ethnographic Alaskan Collection of Adolf Etholén and his Contemporaries in the National Museum of Finland, Helsinki, 1990.

Back to Alaska
Back to Jewellery & adornment