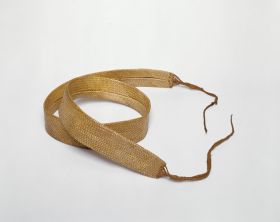 Belt made of flax, ending at each end in a plaited band, the weave turned inward on both sides.

Many belts were collected in addition to cloaks during Cook’s voyages; Kaeppler mentioned seventeen (Kaeppler 1978a: 175). Comparable belts can be found in the collections in Cambridge (Kaeppler 1978a: 175, Fig.328; Shawcross 1970: 325-30), Stockholm (Rydén 1965: 89f.), in the British Museum (Kaeppler 1978a: 175), and in Florence (Giglioli 1893: 185f.).Rydén distinguished between belts with a straight or pointed end. Some belts are patterned with dark flax strips. The end of the belt features plaited flax cords for fastening. The belts were used to support the cloaks; men would also use them to hold their clubs. Markus Schindlbeck